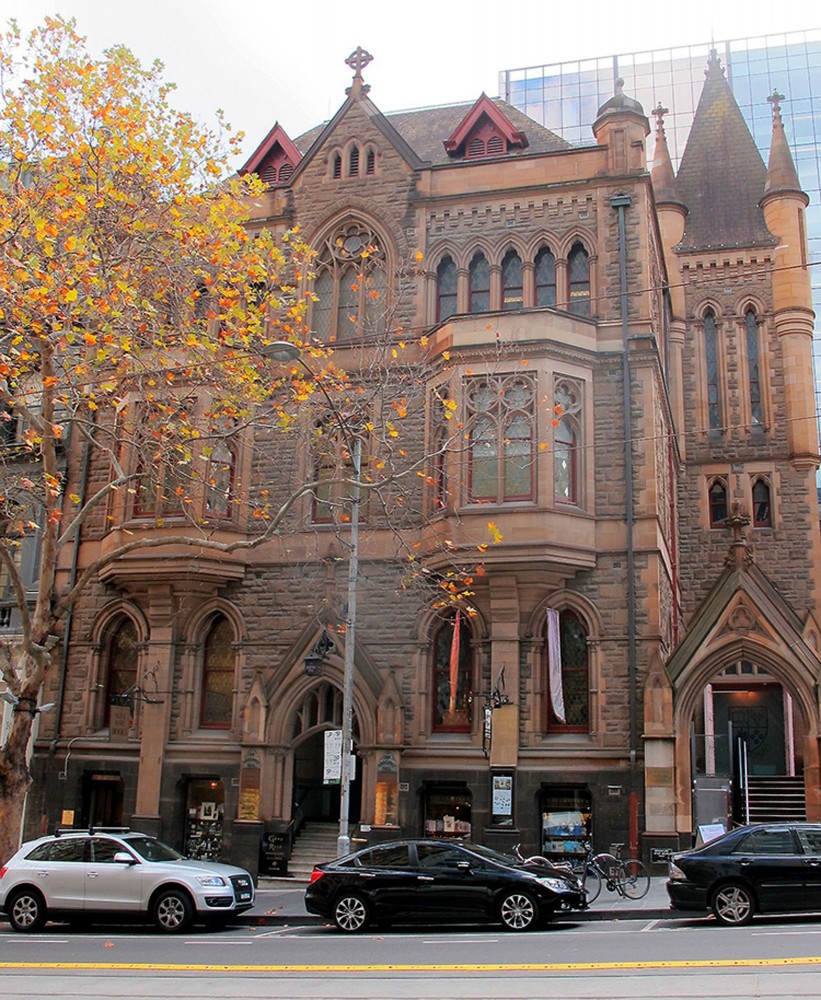 The Essendon Treasure Chest was established on May 28 1965 at 127 Buckley Street, Essendon. It began as a joint venture between Kay Craddock and her parents, Leslie and Muriel Craddock. Their opening stock was a combination of secondhand books, bric-a-brac and handcrafts, and on their first day in business they sold twenty-six books for £28.00. These included a seven-volume set of Macaulay’s History of England, Darwin’s Origin of Species, Davidson’s The Great Pyramid, Revolt in the Desert by T. E. Lawrence and Why We Behave Like Human Beings by Dorsey. It did not occur to the partners, on that first day in business, to record the details of each book sold but Kay recalls they were all lovely copies.

Les Craddock died suddenly of a heart attack on August 10, 1965, leaving his wife and daughter in a partnership that continued for over thirty years. In the late 1990s Muriel retired from an active role in the business, due to failing eyesight. She died on 6 December, 2017, aged 105 years and 8 months.

During their first thirty years in business Kay and Muriel moved premises many times. Their first city bookshop opened in 1967, at 569 Bourke Street, between King and William Streets. It ran concurrently with the Essendon shop until that closed in 1969. In 1990 they moved to their current premises in the Neo-Gothic Assembly Hall building, at 156 Collins Street. This had been the home of the Presbyterian Book Room since 1960. The bookshop has an impressive but informal salon style and an open-door policy. It is situated in the heart of Melbourne's premier street and is hailed as one of Australia's best bookshops.

Browsers are always welcome, and we are happy to provide personal service when required, including assistance in the selection of gifts for all occasions. 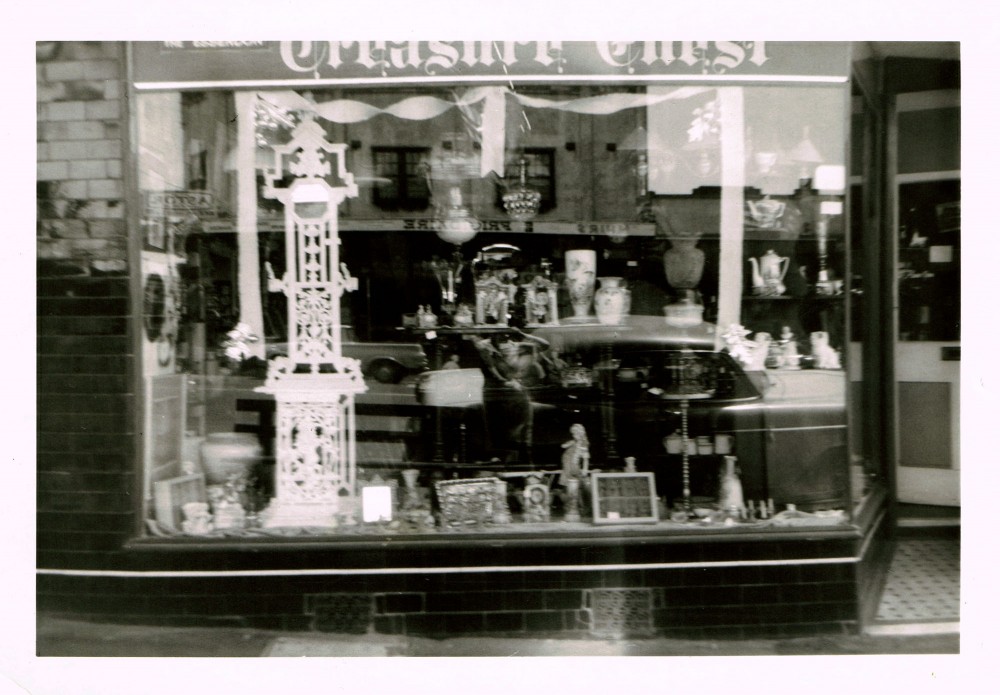 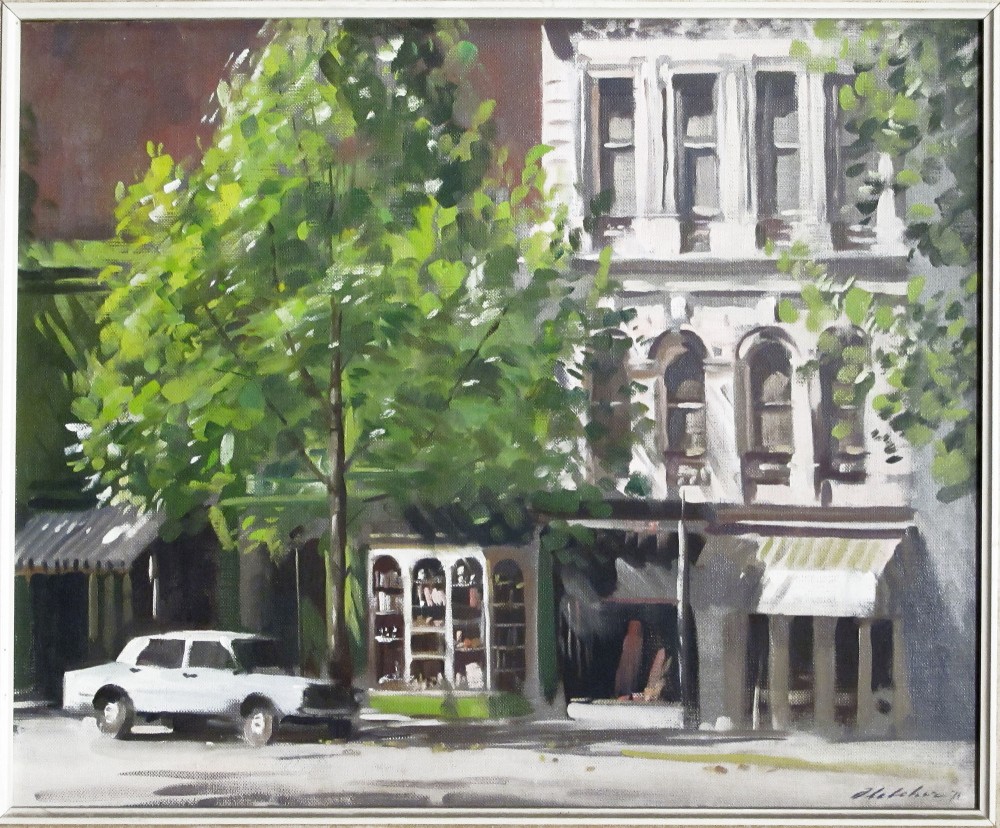 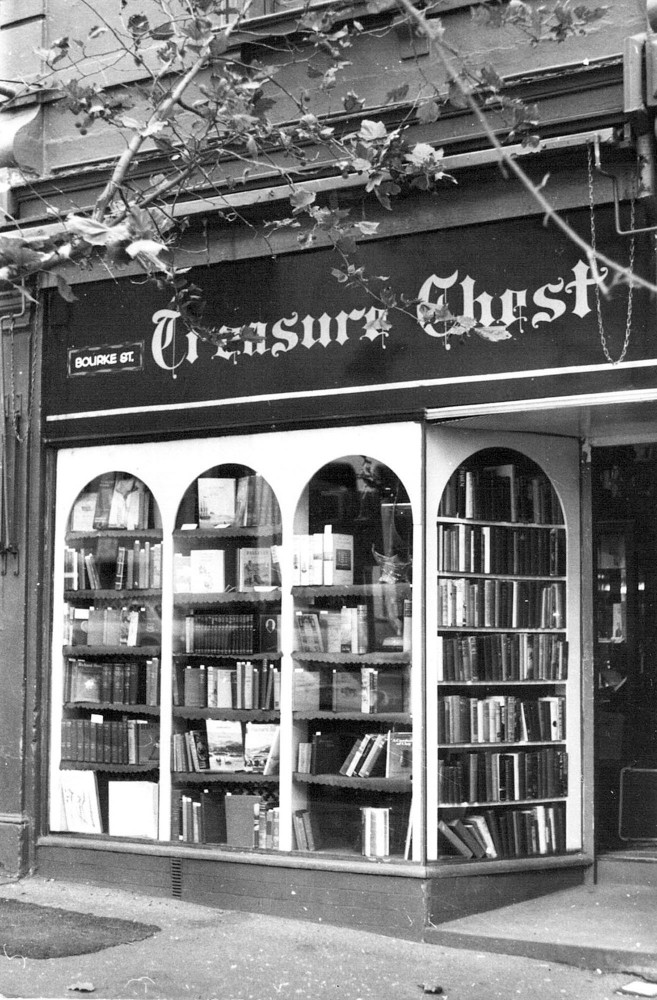 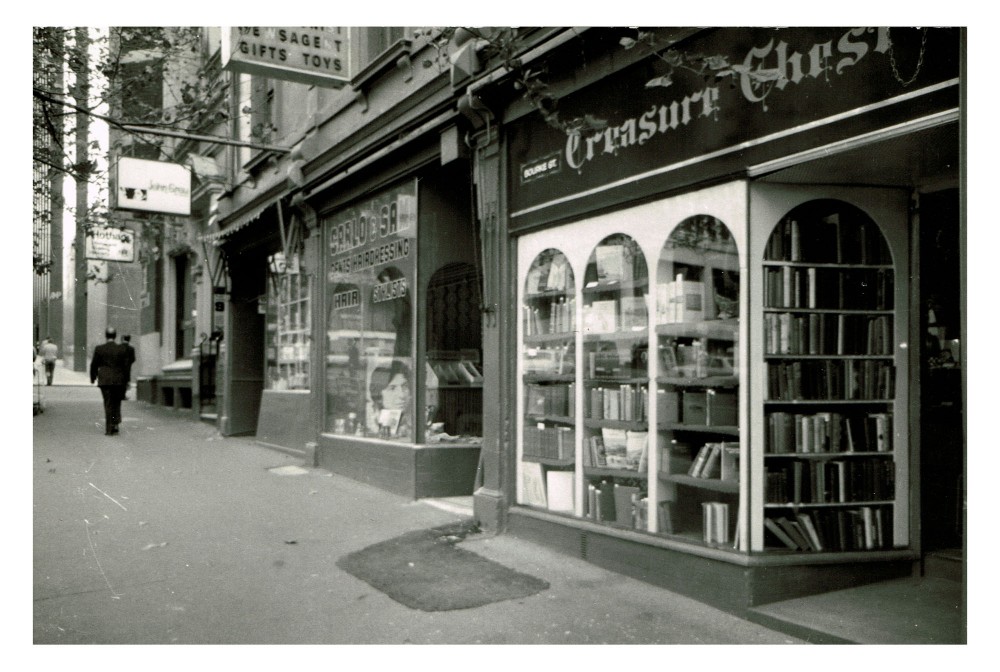 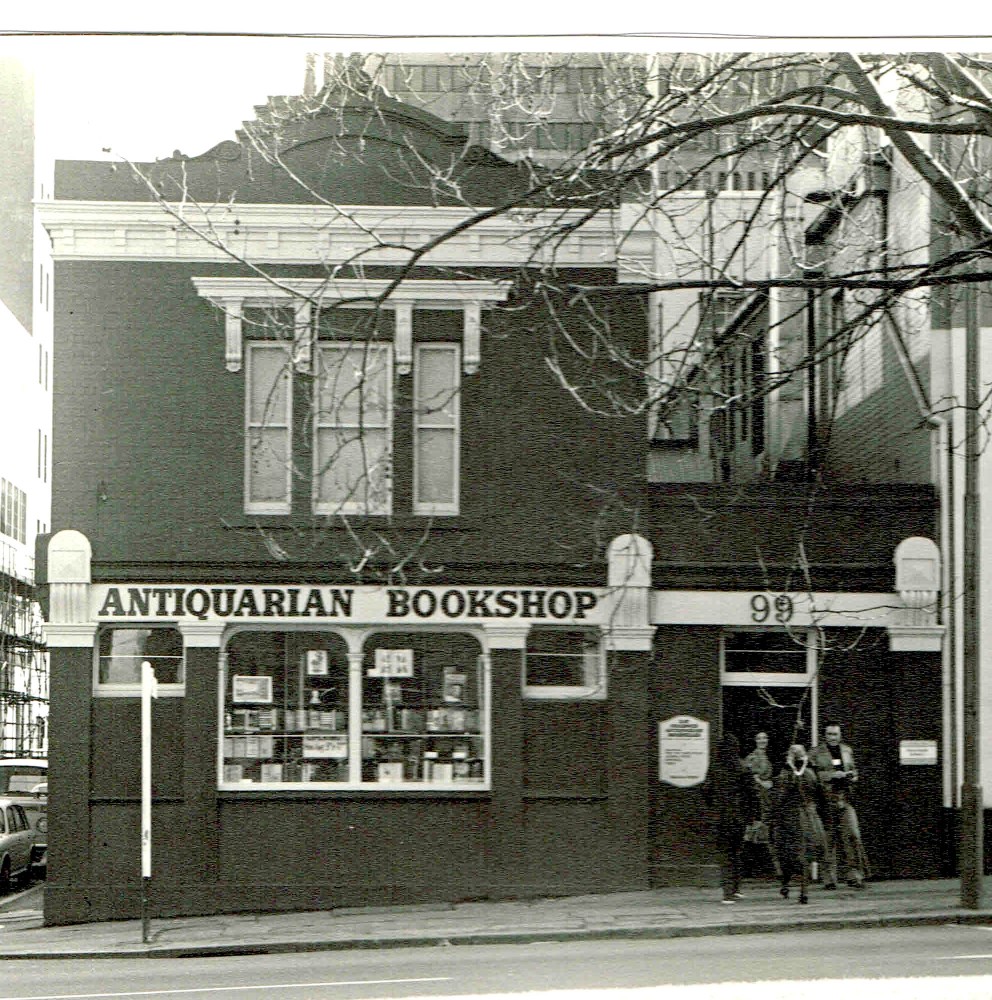 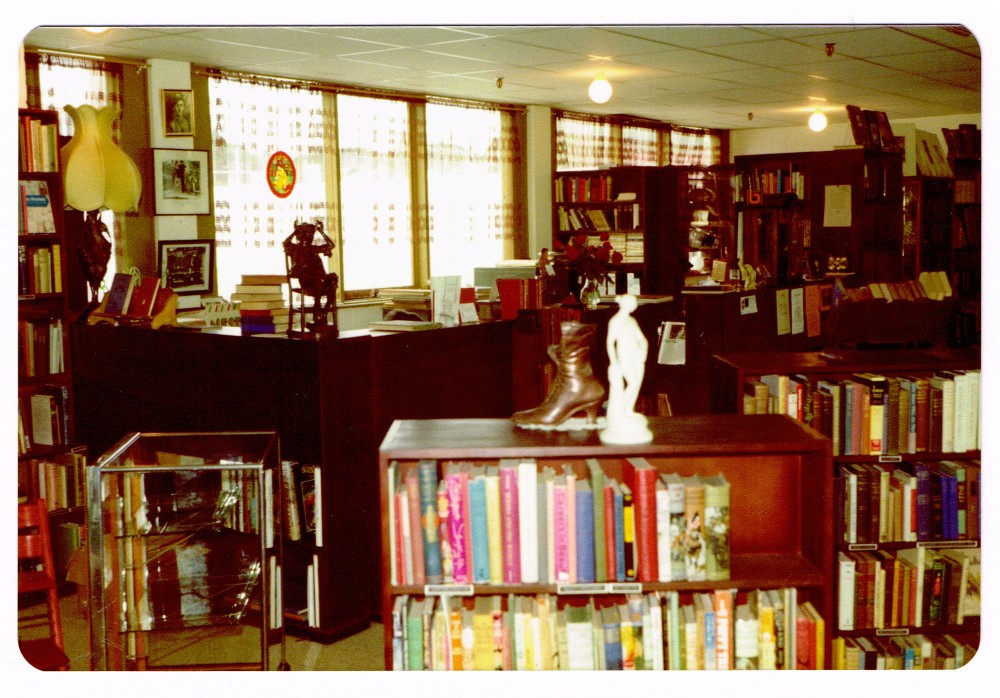 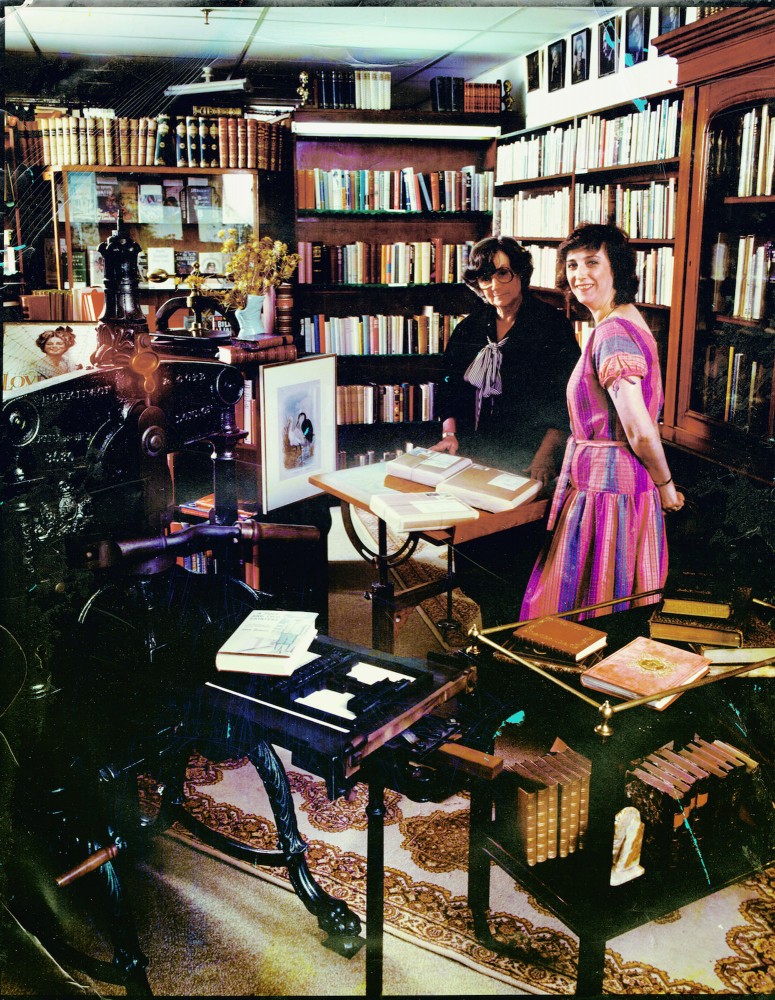 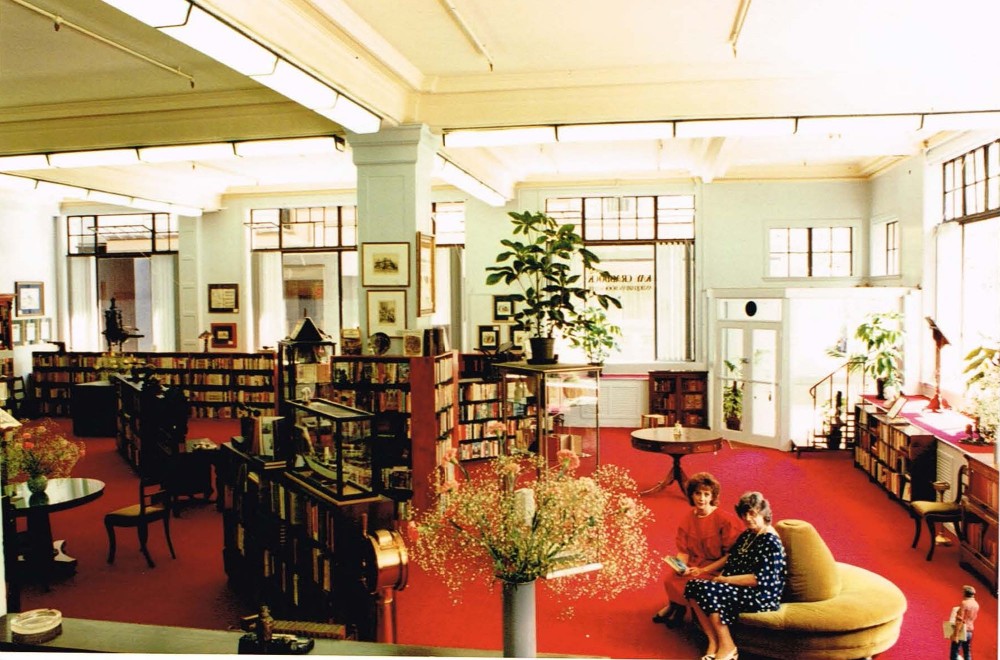 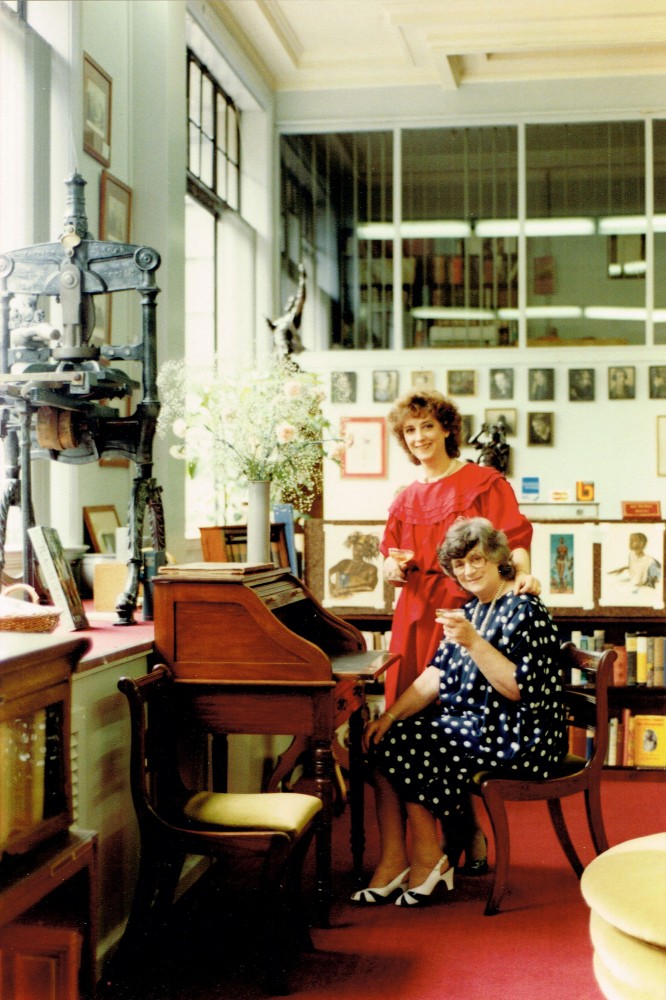 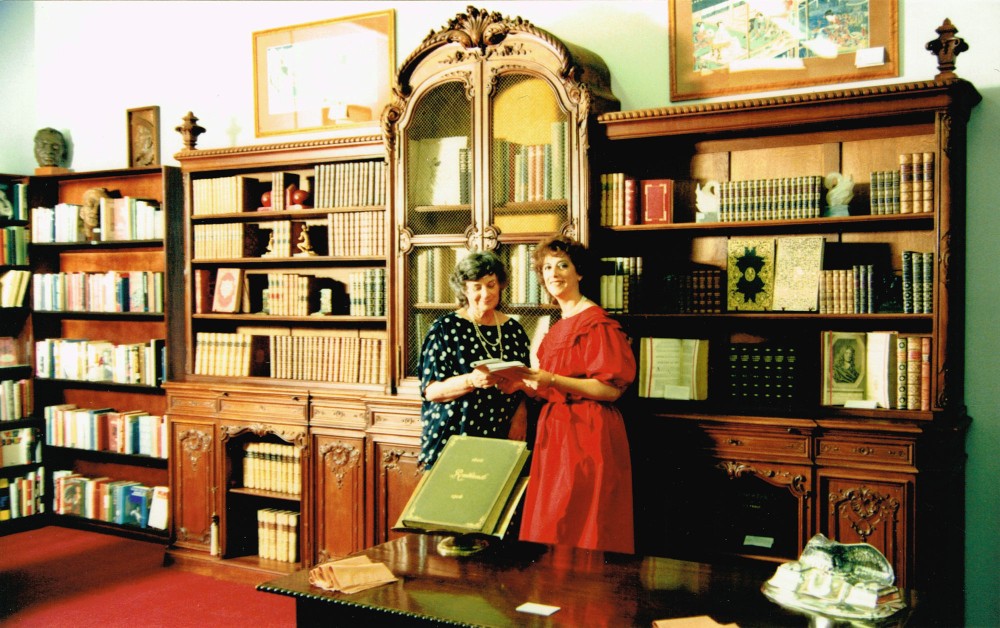 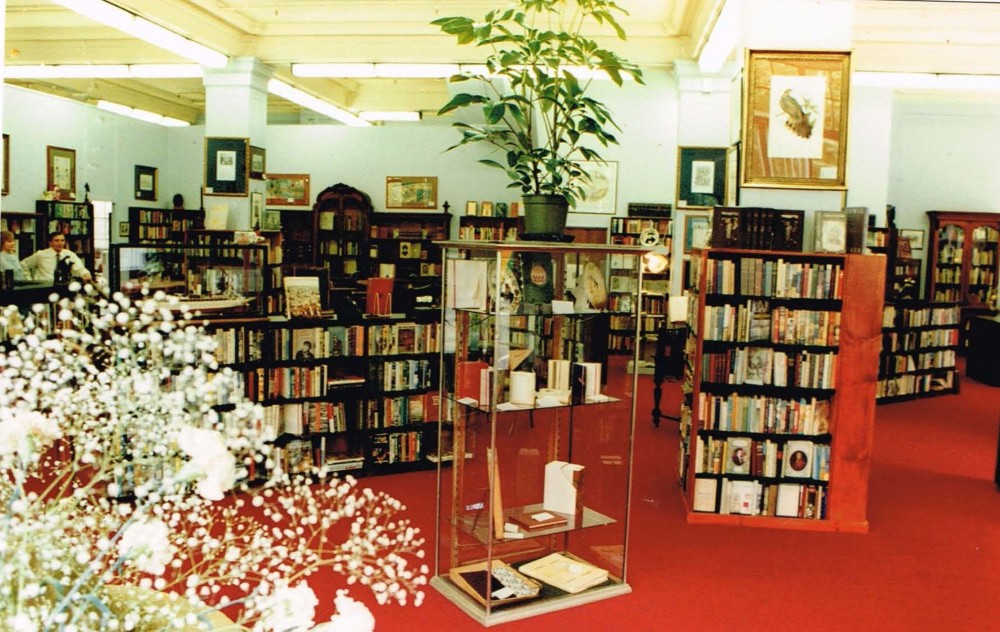 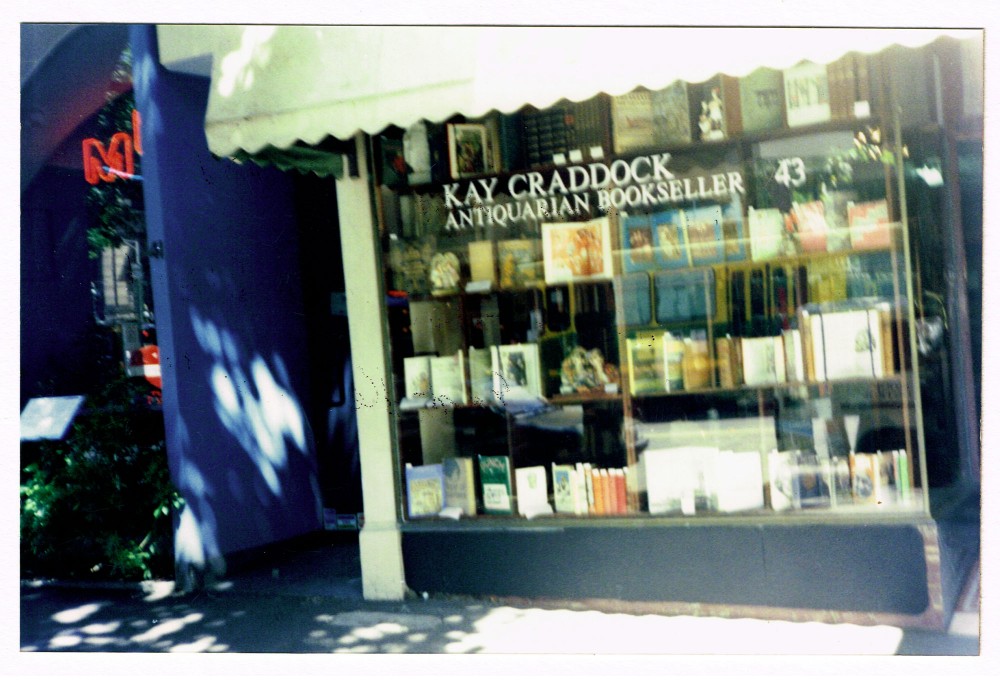 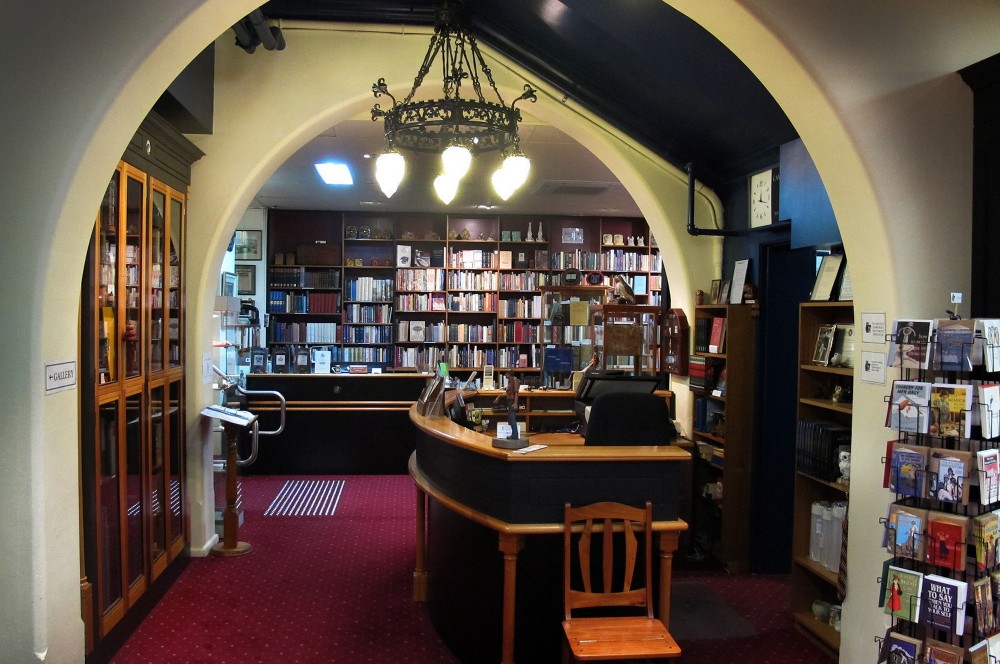 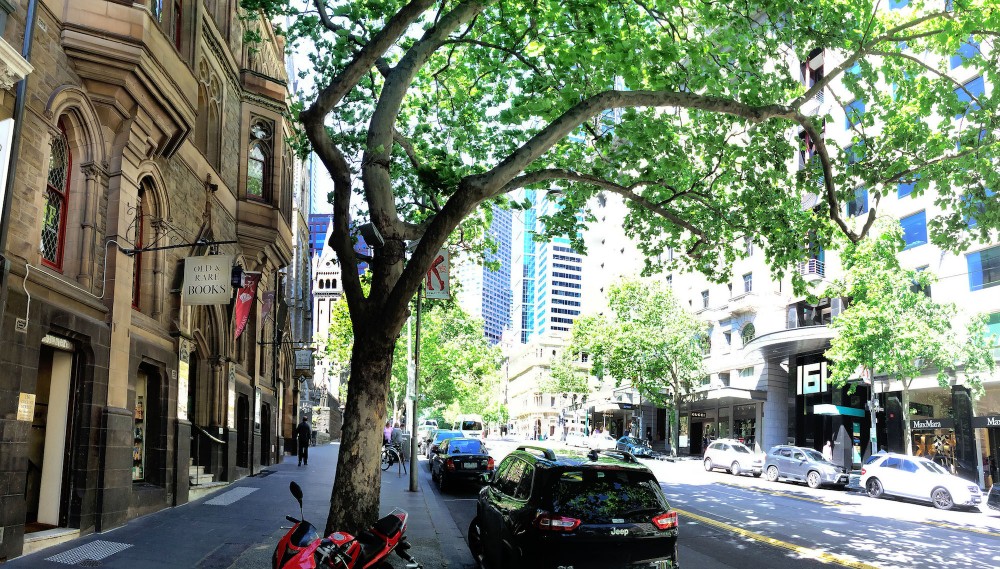 [During renovations to The Assembly Hall Building] 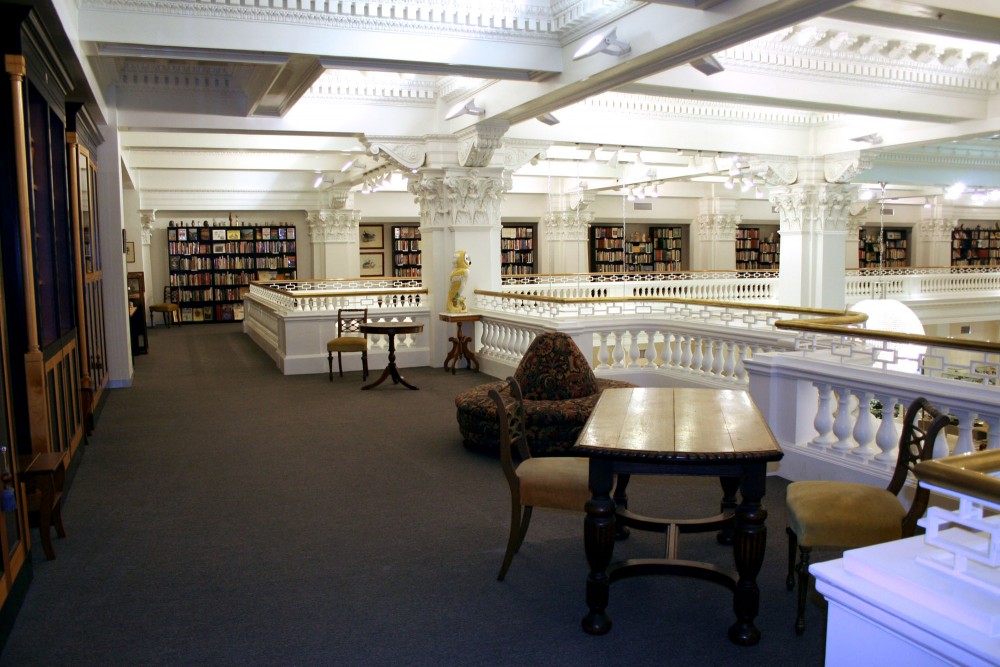 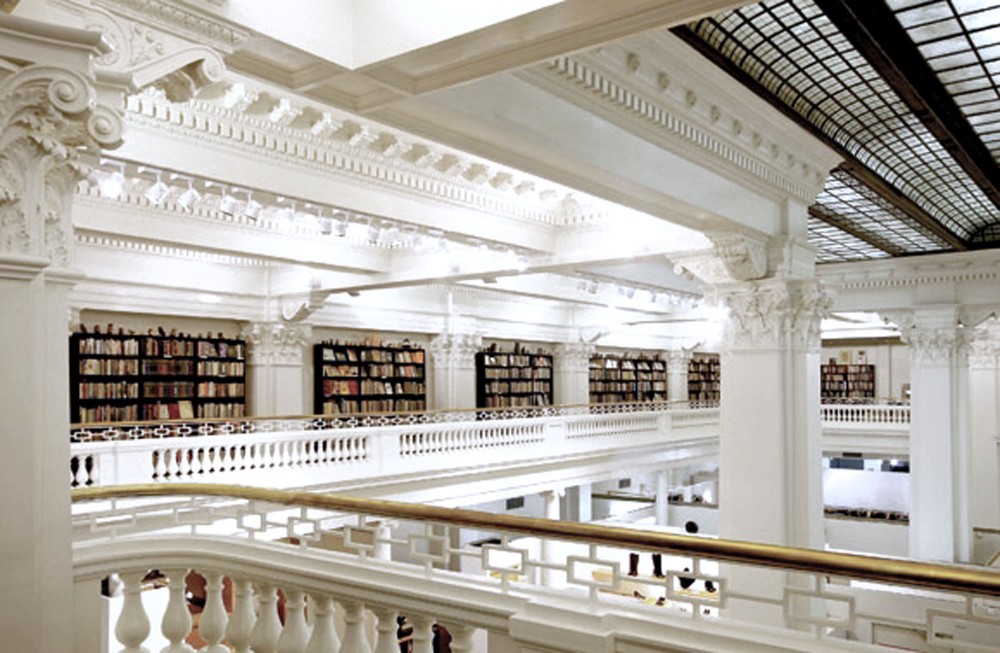 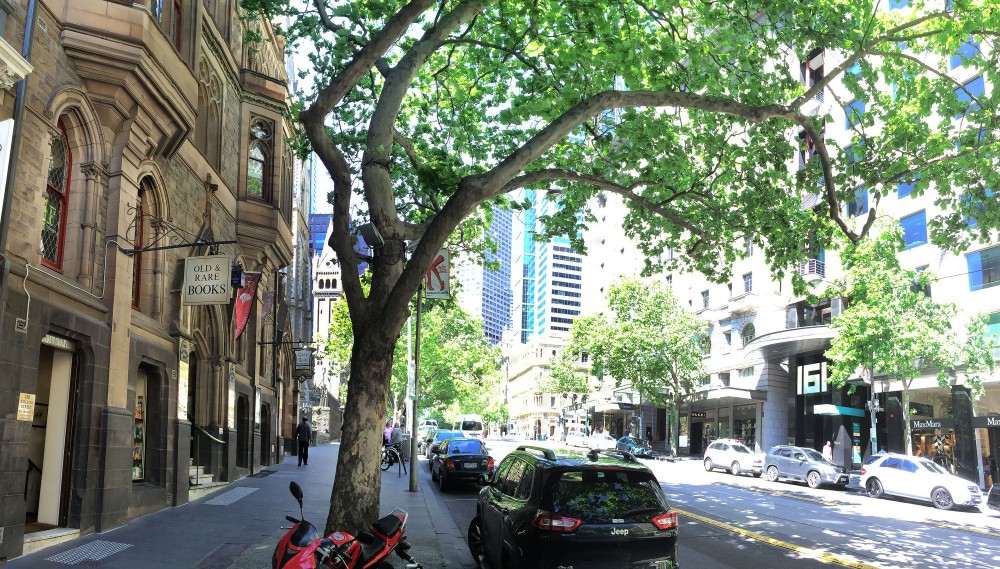 The following article was written by John Holroyd and published in A Christmas Keepsake to celebrate the first Christmas in Collins Street of Kay and Muriel Craddock 1990, a privately distributed pamphlet printed by Jim Lowden.

The Presbyterian Bookroom was established in 1920, in a small upstairs room of the Youth department, in the Assembly Hall, 156 Collins Street, Melbourne. Joseph Kelso was manager until 1936. In that year Miss Eva Annear was appointed to succeed him. Until then she had worked in the Church offices, assisting in the Bookroom as required. The business thrived under her management. It became noted for its high-class theological works. The scope was widened with the addition of good general literature and children's books. The premises had to be enlarged. In 1960 the Bookroom moved to still larger premises, in the basement, but with direct access from Collins Street and having display windows. These quarters had been occupied by the Scottish Tearoom, established by the Presbyterian Women's Missionary Union in 1908 to raise funds for missions. They also published the P.W.M.U. Cookery Book, an excellent little work. It sold very well and maintained its popularity for many years. The Tearoom was closed in 1959. Eva Annear retired in 1963.

Secular booksellers catered as best they could for the Presbyterian connection in the early days. Then, in 1860, Robert Mackay, who had migrated to Sydney from Scotland in 1853, bringing with him the agency for Blackie the Scottish publisher, set up a bookshop in Bourke Street, Melbourne. Stocking Bibles, theology and general literature, he built up a good business, similar to the one he had established in Sydney. In 1870, Mackay sold out to his assistant, Matthew L. Hutchinson, who had come out from Scotland with him. Mackay moved to Wellington, New Zealand, where he opened another bookshop.

Hutchinson maintained the Church business and expanded the general side of it. He died in 1913, and the family conducted it until 1922, when the retail portion was closed down. The Presbyterian part had been relinquished in 1920. When the Uniting Church as established in 1977, it took a two-thirds interest in the Bookroom, with the continuing Presbyterian Church holding the balance. The Bookroom closed down recently. In June, 1990, Kay and Muriel Craddock celebrated their silver jubilee in bookselling with the opening of their antiquarian bookshop in this lovely location, between Georges department store and Scots' Church, in tree-lined Collins Street.

The following article was published in A Christmas Keepsake to celebrate the first Christmas in Collins Street of Kay and Muriel Craddock 1990, a privately distributed pamphlet printed by Jim Lowden. It is an extract from Presbyterian Women’s Missionary Union 1950-1977 by Maisie Paton, kindly supplied by Mrs. M. J. Miller, and the ladies of the P.W.M.U. Additional information supplied by Mrs. A. Talsma, of the P.W.M.U., who was researching the history of the Missionary Depot and Scottish Tearooms.

“The Scottish Tearooms had been opened in 1908 on the other side of Collins Street [number 191] and moved into its new location in the Assembly Hall Building in 1915 - and for over fifty years it filled a need in the life of the church providing a meeting place and refreshment centre for our members and for many church people.* In the early years of the fifties there were hard times, 1951 ending with a debit of two hundred pounds. This was met from the reserve fund, but by 1956-7 finances were healthy and there was a feeling of buoyancy and expectancy, with redecoration of rooms and the long awaited kitchen alterations. It was especially busy during the Olympics (1956). The year 1958 finished with a credit of £846. A bursary at Rolland House was established - so it was especially sad when the urgent need of the Bookroom to expand was brought before the executive and the P.W.M.U. regretfully decided to close down the Tearooms.

A plaque has been placed in the Bookroom remembering and acknowledging the place and work done by the Scottish Tearooms. Special reference should be made of all the voluntary helpers for over twenty years - we remember the service of Miss K. Kemp, Secretary for over twenty years - followed by Mrs. D. J. Gillespie; Miss D. Roediger - the Treasurer for over thirteen years and Convener for a number of them and of Mrs. Addison, the Manageress.

*The tearoom was established in order to further the sale of missionary literature [and] New Hebridean arrowroot, and to provide a Missionary-Centre which would give visibility to the Church’s work for Missions ... [P.W.M.U. Annual Report, 1908-1909]”